Superstarman (スーパースターマン) is a super hero that resembles a pop/rock star who tags along with Luckyman and Doryokuman on their adventures. He is the weakest hero,and has no super powers whatsoever, and only became a super hero because he wanted to be famous. In the anime, he debuts in episode 11, and is voiced by Tetsuya Iwanaga.

Superstarman's design is based off of that of a pop star, particularly a 70's glam rock star. He wears a blue-purple leotard with long sleeves. It has a large red flared collar, lined with gold, that goes over his shoudlers and to his back. Emblazoned on his back is the kanji "Medachi" (目立). "Medachi" is the last name of his human alter-ego, in the manga and anime, and is a word that usually has something to do with fame. On the front is a golden star that reads "SUPER STAR". He wears long white gloves and high-heeled white boots, with stars at the cuffs of both, and fishnet stockings.

Like his human form, he has spiky black hair (brown in the manga), He also has shiny green eyes, his eyebrows and nose have disappeared, and he always has a perfect smile on his face, somewhat resembling heavy plastic surgery. Because of this, his lips don't move when he talks, a trait shared with his two comerades, Luckyman and Doryokuman. He also wears star earrings, and has another star on his forehead, which can produce large, star-shaped blades if touched.

Superstarman has a cocky and narcissistic personality. He is absolutely crazy for attention and fame, and mostly cares about only himself. He constantly tries to upstage people with his singing, and because of this, he is found very annoying by heroes, friends and even aliens. Furthermore, is constantly beaten to a bloody pulp in return. Fortunately, his cell regeneration power counters that.

Long before he became a hero, Superstarman was just a human, a young man named Tagaru Medachi.

Introduced simply as a friend very early in the series, Tagaru was just a bum who lived in a run-down shack, sleeping under cardboard boxes and eating whatever he found on the floor, which was not very good, for he loved attention, and never got any.

One day, he tried to gain the attention of Mitchan, but failed miserably. He lost his pride, and became extremely sad. But then he thought if he was a hero, like Luckyman, he would get Mitchan's (and everybody else's) attention for sure. so he was crazy enough to get a painful surgery inside a mysterious building in order to become a super hero.

After the surgery, Tagaru was given a special bow tie. Similar to Luckyman's rakkyo, this bow tie was all he needed to transform.

The eager and excited Tagaru then burst through the door of Yoichi's school, with his new bow tie. When he put it on, his eyes turned sideways, and he underwent a transformation. He came out as a star-clad super hero

, called Superstarman. When the students saw him, they cheered, and were very impressed. It was the happiest day of his life.

He then jumped out of a window in an attempt to fly, only to crash on the ground and realize that he had no super powers, and that the surgery was a scam. Upon crashing, an alien landed in front of the school, challenging him to a battle. He called up a TV crew to broadcast him fighting the alien. Of course, he lost miserably, and Luckyman and Doryokuman had to destroy the alien for him. Still to this day, he continues to prove himself wothy of attention--and continues to fail.

Tagaru). He has a kid brother named Takunai (拓内) and a younger kid sister named Masenko (真千子). the family also owns a pet Pegasus (ペガサス). His name is a pun on the phrase "Medachitagaru", which means "to show off".

He lived in a broken house at first but his home was destroyed and after Chefman and Kitchenman were boiled to Death, Medachi made the alien boss' spaceship his royal home.

In the anime, he seems to have an alternate outfit that appears in some episodes, starting with episode 12. The outfit is closer to Superstarman's - a blue long-sleeved shirt, with

matching pants, a belt, and white shoes. The shirt has a red flared collar, and a yellow star on it.

In order for Medachi to transform into Superstarman, he must wear a special bow tie called a Medachi Tie (目立タイ Medachi Tai). The word "Medachitai" (目立ちたい) usually means "to be the center of attention". However, the word "medachi" alone literally translates to "vertical eye", while "tai" is the phonetic Japanese word for a neck tie. So therefore, it is a neck tie that turns his eyes sideways, then brings him fame. It's a gag.

SSRNA (Superstar RNA): Superstarman does not have any powers at all, and is incredibly weak - however, it was later revealed that when Medachi got surgery to become a super hero, his cell division rate got a massive boost: instead of being

Because of this, he never gets hurt, and he can't be killed, because he always recovers.

Superstar Cutter (スーパースターカッター): Superstarman puts his finger on the star on his forehead, and it comes off on his finger. The star grows bigger and sharper, and can be used like a shuriken. It doesn't fly far as Superstarman doesn't have such power within himself, and lands mostly halfway between him and the opponent. Though it proves useful because of Luckyman's Luck abilities.This and his immortality are the only powers he has--he doesn't have a punch, kick or beam like most of the other heroes.

Immortality: Superstar man always recovers even after being beaten to lime pulp. When he lost against Speed man, he was terribly injured but after minutes he was fit and fine with his show off.

Superstar Metal Sheet: Silver Metallic Sheets of stars that Superstarman created, though it was useless to him, it saved Luckyman from a bullet launched by Gun man

Superstar Tornado: This is Superstarman's secret attack which he used in the war against Speedman (though, he didn't win)whereas he again spread roses, indeed tons of rose petals continuously, spinning on 1 toe, with the Superstar Cutter tied to a string with his finger, he keeps spinning till the superstar cutter goes ahead and returns back like a boomerang. When returning, it has to damage the enemy, according to SuperStarman. While doing this against Speedman, he failed as Speedman dodged, but then he reverted the cutter back at him slicing of a part of his green head costume and take him out of the green space where Speedman should stay, or reveal his disguised form. Really top secret !

He turns his eyes sideways and says "Straight Eyes !" then he wears the bow tie similar to those eyes and says "Bow Tie !" Then he enhances roses saying he is good and better than Luckyman... Super-Star- Man !!!-Which is totally crazy 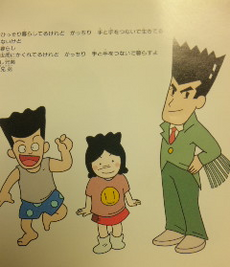 Takunai, Masenko and Tagaru (from left to right), as they appear in the anime. Thanks to Morumomi_ko on Twitter for the picture!
Community content is available under CC-BY-SA unless otherwise noted.
Advertisement