Yoichi Tsuitenai (追手内洋一 Tsuitenai Yoichi), better known by his superhero alter ego Luckyman (ラッキーマン Rakkiiman), is the titular protagonist of Tottemo! Luckyman. He is Japan's unluckiest middle schooler who has the ability to transform into the universe's luckiest superhero, Luckyman. He is tasked with the job of protecting the world from evil aliens, with nothing but the power of good luck by his side.

Yoichi is a average looking young boy of short stature, with his most notable characteristics being his onion-shaped tuft of hair, and his elongated earlobes. He usually either wears a white, collared shirt with green baggy pants and brown shoes, or when at school, a blue blazer and pants with a white undershirt and red tie.

As Luckyman, his hair is replaced by a spike, with a teacup containing an upright tea stalk (also known as a "chabashira", or 茶柱) that is attached to his forehead. He dons a red jumpsuit with the kanji 大吉 ("Daikichi", literally means "great luck") emblazoned on his chest, and wears white gloves and boots. On each boot, サイコ~ ("saiko~") is written on the soles of them. Additionally, as a visual gag, the back of Luckyman's suit will often contain a short, comical sentence that changes depending on the situation. He is also noticeably taller than his normal civilian form as Yoichi, though his height is never stated.

An unusual trait of Luckyman's appearance is that his mouth stays completely still when he talks. This is shared by his fellow superheroes, Doryokuman and Superstarman.

Yoichi has little confidence in himself, being usually dismissive and pessimisstic about most things. He is rather accepting of his fate as the unluckiest kid to ever exist, and tries his hardest to live a normal life despite constantly having to suffer brutally under his extreme case of bad luck.

As Luckyman, his personality drastically changes: He becomes a good-natured person with a strong, heroic spirit, and is overall a very upbeat and optimistic person, even to the point of coming off as silly. In spite of these positive traits however, he can also be selfish, cowardly, and lazy. During encounters with various foes, he will often attempt to run away from the battle, or try to get others (such as Doryokuman) to fight for him. When he wins, he puts on a prideful front, boasting claims about things like how he could predict his enemy's every move, or that his lucky mistakes were just him intetionally trying to trick his opponent.

In both forms, he has a strangely prominent fascination with girls, especially Miyo, who he has a crush on. Yoichi often spends most of his time writing love letters to Miyo in order to confess his love to her, but due to his bad luck, there's always something preventing her from ever receiving his letters.

Luckyman was originally an good and ordinary boy, helping others. He originally named Yoichi Tsuitenai. However, there was one thing different about Tsuitenai - he happened to be the unluckiest boy in all of Japan.

People picked on him and beat him up. Girls didn't like him. And when he was in trouble, he had no-one to help him.

One day, his luck truly ran out when an alien spaceship crashed into his hometown, right on the spot where he was riding his bike to try and give a love letter to the girl of his dreams. The spaceship ended up crushing him, thus killing him. As Yoichi's angel floated up into the heavens, he could see his crumpled body on the ground, the townsfolk gazing at what happened, and the mantis-like alien threatening to conquer his hometown and the Earth. It was at that moment that he was also spotted by the luckiest superhero in the cosmos, the great Lucky Man. (who is a separate entity from Luckyman)

Lucky Man saw what happened, and saw that Miyo was in trouble, and offered to help. Yoichi got very angry at the thought, because Lucky Man would end up stealing his girl with his luck, and started choking him out of anger. But then, before as he knew it, Lucky Man and Yoichi merged together as one singular being, turning into the newly formed superhero Luckyman.

In his brand new form as Luckyman, he was able to defeat the alien not with strength or speed, but with the power of good luck, as well as other lucky things happening to him, such as finding the alien's wallet on the ground. But after a few minutes of victory and being hugged by the girl of his dreams, he suddenly turned back into his old, unlucky self. He was very disappointed about this. Then later on, he received a jar of special pickled garlic cloves, called rakkyo - each infused with Luckyman's powers of good luck - for whenever he's in trouble.

Though in the anime, the fusing scene wasn't shown, with Lucky Man instead just giving him the jar of four-leaf cloves and flying back to outer space.

Of course, when Luckyman turns back into Yoichi, he goes back to being unlucky again, but that will change when he turns into Luckyman again the next day. When there's trouble, just swallow a rakkyo!

Being a super hero, Luckyman also has a range of superpowers, and his comrades do as well. Lucky Man is physically weak and flimsy, although he always wins because of his good luck. Also, like his comrades, he can fly, and has his own punch, kick and laser beam.

Luck (ラッキー): Although he may be weak, he always gains the higher advantage due to his good luck. With this, he can win a battle, score a date with a girl (or two), or even get a hold of an alien's wallet.

Lucky Punch (ラッキーパンチ): Luckyman's punch attack. Luckyman runs up slowly with his fist out, usually in a flimsy fashion. Despite how it looks, the punch deals incredible damage, if it hits.

Lucky Beam (ラッキービーム): His beam attack. He puts his hands up to the tea cup on his head, and fires a small, green, almost liquid-like beam that shoots extremely slowly. But like most attacks, it can deal massive damage if it hits.

Lucky Saber / Chabashira Saber (manga: 茶柱サーベル chabashira saberu / anime: ラッキーサーベル rakki saberu): Luckyman takes off the tea cup on his head and holds it in his hand, as the chabashira extends to make a saber. The saber is infinite; it can grow as short or as long as needed, and always regenerates whether it's cut, diced or burnt. 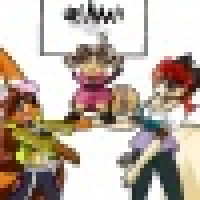 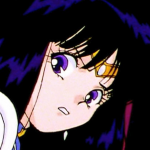